The Shaolin monks of China have been practicing the art of Kung Fu for thousands of years.

The Shaolin monks of China have been practicing the art of Kung Fu for thousands of years. While there are many schools of Kung Fu in China, Shaolin are one of the more religiously devout and disciplined.

The title of Shaolin actually refers to a specific Buddhist monastery. It should be noted that the Shaolin were famous in China long before the Kung Fu TV show. Their fame in China is due to the monks' heroic and swift rescue an emperor during the Tang Dynasty. Most Chinese people are not keenly aware of the Kung Fu TV show, and have no idea who David Carradine is or anything about his character, Kwai Chang Caine.

Note: The literal meaning of these two characters is "little forest".

The fame of the Shaolin has spread all over Asia, as even though this is a Chinese title, the same characters are used in Japanese with the same meaning.

少林寺 is the full title of the Shaolin Temple.

This refers to the Buddhist monastery famous for its kung fu monks.

少林寺 is also known in Japanese where they use the same characters but romanize it as Shourinji or Shōrinji.

Some believe this monastery and temple represent the place where Bodhidharma sat with his face to a wall for nine years leading to his discovery of enlightenment and establishment of Buddhism.

少林拳 is the title of the martial art (style of Kung Fu) that is taught to the monks and students in the Shaolin Buddhist Monastery.

The addition of Chuan or Quan which means fist is what signifies that you are talking about this school or form of martial arts.

One of the most famous types of martial arts in the world - and not just because of Bruce Lee.

Some translate the meaning as "Accomplishment by Great Effort". I think this is partially true but directly translated it literally means "Merit/Achievement/Accomplishment Man". The word "fu" can sometimes mean "husband" or "porter" but in this case, it can only mean "man". However, few in China will think "man" when they hear the word "Gong Fu" spoken.

This term is also used for things other than martial arts. In fact, it's used to refer to a person with excellent skills in crafts that require a great deal of effort such as cooking, tea ceremonies, and calligraphy.

What a lot of people don't know is that the spelling of "Kung Fu" was actually taken from the old Wade Giles form of Romanization. Using this method, the sounds of the English "G" and "K" were both written as "K" and an apostrophe after the "K" told you it was supposed to sound like a "G". Nobody in the west knew this rule, so most people pronounce it with a "K-sound". And so Gong Fu will always be Kung Fu for most westerners.

Also, just to educate you a little more, the "O" in "Gong" has a sound like the English word "oh".

The popular Chinese dish "Kung Pao Chicken" suffers from the same problem. It should actually be "Gong Bao Chicken".

Historical note: Many will claim that Kung Fu was invented by the monks of the Shaolin monastery. This fact is argued in both directions by scholars of Chinese history. Perhaps it is more accurate to say that the Shaolin Monks brought the original fame to Kung Fu many generations ago.

Japanese note: While most Japanese martial artists will recognize these characters, Katakana is more often used to approximate the pronunciation of "Kung Fu" with "カンフー." Some will argue as to whether this should be considered a Japanese word at all.

This title is specific to a certain technique - if you are studying Shaolin Chang Chuan, then you are already aware of all the ramifications.

This is a poem, including title, that celebrates the tactics and virtues of the Shaolin Kung Fu Monks for future generations.

少林禪 is part of a movement to provide spiritual and mental health by integrating the practices of martial arts and meditation. 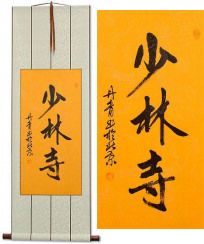