We have many options to create artwork with the character/symbol for Horse on a wall scroll or portrait.
If you want to create a cool Horse wall scroll, this is the place. Below you will find a few Asian symbols that express the idea of Horse.

2. The Spirit of the Dragon Horse

3. The Spirit of the Dragon Horse and Power of a Tiger.

馬 is the character for horse in Chinese, old Korean, and Japanese.


Are outgoing and active.
Don't give up easily.
Are known to have a bad temper.

The Spirit of the Dragon Horse

龍馬精神 is an old proverb that is used to wish someone good health and success combined as a great compliment.

The meaning is "The vigor and spirit of the legendary dragon-horse". These four characters are often accompanied by four more which mean, "...and the power and prestige of the tiger". Here we are just offering the first part which is considered the short version.

By giving a wall scroll like this to someone, you were either wishing or telling them that they have an amazing quality. There is also a suggestion of good health - at least anyone with the vigor of a dragon horse, would seem to also be in good health.

Note: In Japanese, this would be read as the spirit of 坂本龍馬 (Sakamoto_Ryōma), a beloved rebel who help abolish the old Japanese feudal system. This can be confusing, so I am declaring this proverb to be Chinese only.

The Spirit of the Dragon Horse and Power of a Tiger.

This is an old proverb that is used to wish someone great health and success combined as a great compliment.

The meaning is "The vigor and spirit of the legendary dragon-horse, and the power and prestige of the tiger".

By giving a wall scroll like this to someone, you were either wishing or telling them that they have these qualities. There is also a suggestion of good health - at least anyone with the vigor of a dragon horse, would seem to also be in good health.

火馬 is the title, "Fire Horse".

火馬 is not a common title for calligraphy. You might be looking for 丙午, 43rd year of the sexagenary cycle (year of the Fire Horse, renowned for disasters and the birth of women destined to kill their husbands).

Figuratively, it means, "innocent children's games", "childhood sweethearts", or "a couple who grew up as childhood friends".

This phrase may sound a little strange as it's a kind of Chinese proverb or idiom. It makes much more sense in Chinese than English.

麒麟 is the title of a mythical beast of Asia.

The animal is thought to be related to the giraffe, and in some ways, it is a giraffe. However, it is often depicted with the horns of a dragon or deer and sometimes with the body like a horse but many variations exist.

In Japanese it is pronounced "Kirin" as in "Kirin Ichiban" beer. 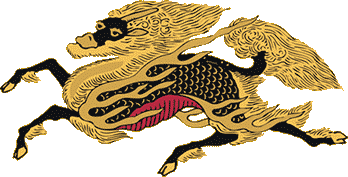 1. 麒麟 is sometimes spelled as "kylin".

2. In Japanese, this is the only Kanji word for giraffe. Therefore in Japan, this word needs context to know whether you are talking about the mythical creature or the long-necked giraffe of Africa.

3. Apparently, this was the first word used for regular giraffes in China (some were brought from Africa to China during the Ming Dynasty - probably around the year 1400). Though the mythical creature may have existed before, the name "qilin" was given to the "new giraffe". 麒麟 is because, more than 600 years ago, giraffes somewhat matched the mythical creature's description when Chinese people saw them for the first time. Later, to avoid such an ambiguous title, a three-character word was devised to mean a "giraffe of Africa". The characters for "qilin" shown here are only for the mythological version in modern Chinese.

4. More information about the qilin / kirin from Wikipedia.

5. This creature is sometimes translated as the "Chinese Unicorn", even though it is generally portrayed with two horns. I think this is done more for the fantasy aspect of the unicorn and because most westerners don't know what a qilin or kirin is (this avoids a long explanation by the translator).

6. In Korean, this can mean kirin or simply giraffe (usually the mythological creature is what they would think of when seeing these characters alone on a wall scroll).

The first character has the element of "horse" in it, and alone can mean "one who rides".

Can also be translated as "cavalier."

Lookup in my Japanese & Chinese Dictionary